CNRS INSB make a focus on the "metabolic contest" found in trypanosomes: 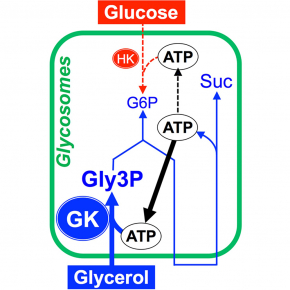 In this paper published in the journal PLoS Biology, scientists describe a new molecular mechanism by which trypanosomes, the parasites that cause sleeping sickness, control and prioritise the use of carbon sources. Using biochemical, metabolomic and reverse genetic approaches, they have elucidated the mechanism of preference for glycerol over glucose, which is based on competition between two enzymes for the same substrate.
See the focus
See the publication

This is our first Team logo!!

It is really beautiful!
Thanks to our designer, Yoann, who created it.

We are pleased to welcome our new Post-Doc !

Aline Rimoldi-Ribeiro will work with Frédéric Bringaud on the adaptation of trypanosomes to glycerol. She will also study the way Suramin, a trypanocidal drug, works.

We won the first price 🥇 for the Lab Christmas Contest 2021. This year each team had to make a movie poster...

Here is our winning poster! 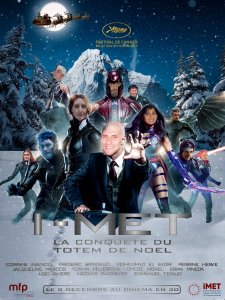 In its SBM letter #20, the SBM departement did a focus on our recent publication: "Glycerol suppresses glucose consumption in trypanosomes through metabolic contest".

Here is the focus: 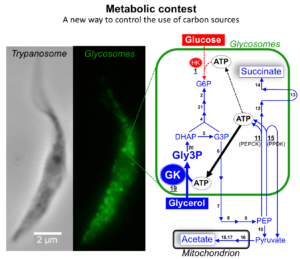 We wish you all the best!

We are pleased to welcome 2 new PhD students in our team! 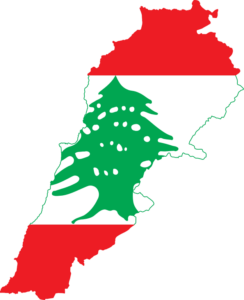 Mohammad El-Kadri who has been selected through the Labex ParaFrap PhD Program. He will work mainly on the Trypanosomes/Adipocytes metabolic interactions with Fréderic Bringaud.

Perrine Hervé who brilliantly passed the competition of the doctoral school of Bordeaux last summer. She will work on phospholipases with Loïc Rivière.

Congratulations to Magamba Tounkara who is now PhD in Microbiology-Immunology from the University of Bordeaux and also from the University Nasi Boni in Burkina Faso! Magamba was funded by the LabEx ParaFrap PhD-Pays du Sud program. The thesis was ZOOM made.

He doesn't go far because he stays in the unit and joins the ProParaCyto Team just next door.

Congratulations to Sarah Monic who is now PhD in Microbiology-Immunology from the University of Bordeaux! Sarah was funded by the ARS (Agence Régionale de Santé Nouvelle Aquitaine). The thesis was ZOOM made.

We wish you all the best for the Post-Doc you find in the Mark Carrington Lab.

After 4 years of tremendous work within our iMET team,
crowned by a great thesis defence last December,
Oriana left our lab yesterday for new horizons.

Good luck Oriana in your next lab in Montpellier! 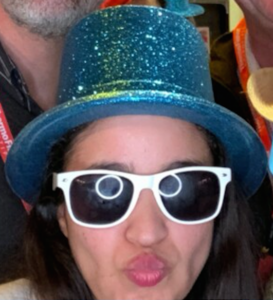 We won the 2nd price for the Lab Christmas Picture Contest 2020. (see the new) 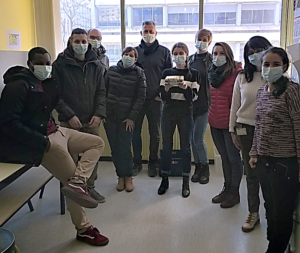 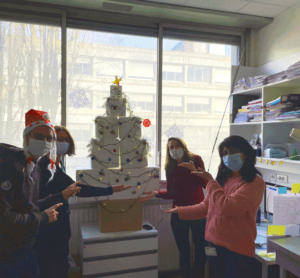 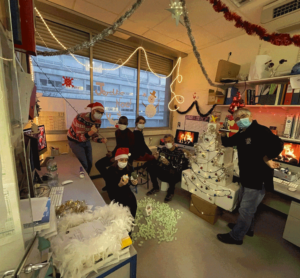 2020-12-04 / Congratulations to Oriana Villafraz-Marquez who is now PhD in Microbiology-Immunology from the University of Bordeaux! Oriana was funded by the LabEx ParaFrap PhD program.

The thesis was zoom made!! 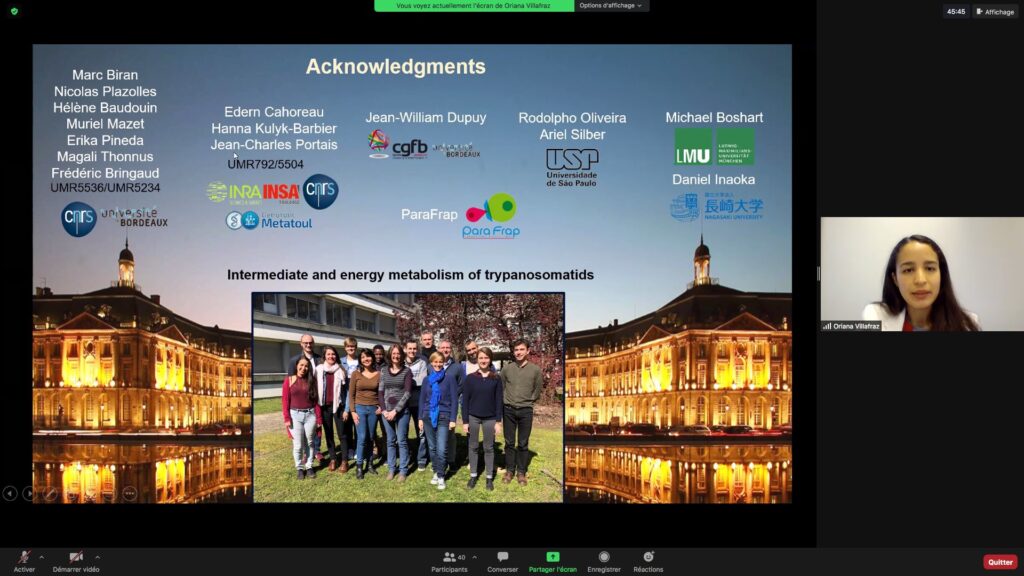 2020-12-02 / Congratulations to Chloé Morel who presented her poster at the SBM annual conference.

This presentation was zoom made and recorded!!

Trypanosomes are parasites responsible for the African sleeping sickness as well as the related cattle disease Nagana. During the trypanosome life cycle, the parasite exist in at least two replicative forms; the procyclic form, transmitted by the tsetse fly Glossina spp., and the bloodstream form responsible for diseases in vertebrates. The pathogenic trypanosomes have a single mitochondrion, unlike most other eukaryotes that contain numerous. The shape and functional plasticity of their single mitochondrion undergoes spectacular changes, reflecting adaptation to different environments, alternating between the proline-rich haemolymph and tissue fluids of the blood-feeding tsetse fly and the glucose-rich blood of a mammalian host. The combination of these different states, among which the trypanosome mitochondrion oscillates, makes it an ideal model organelle for studying mitochondrial functional and dynamic transitions. Remodeling of the organelle suggests that trypanosomes possess fusion and fission machineries. We have identified putative components of these machineries, one of them is a putative mitofusin (TbMFN). TbMFN contains 21% of identity with the human MFN1, involved in mitochondria fusion, in addition of the dynamin characteristics domains, including the GTPase domain and the coiled-coil domain. Our main goal is to first characterize the putative TbMFN involved in mitochondrial dynamics and then to investigate the physiological relevance of mitochondrial fusion/fission machineries to the parasite’s life cycle. 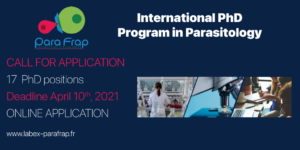 Title of the project: Role(s) of glycerol metabolism in the biology of African trypanosomes

Trypanosoma brucei, the agent of Human African Trypanosomiasis (HAT), undergoes a complex life cycle from the bloodstream of a mammalian host (BSF) to the alimentary tract (procyclic forms - PCF) and the salivary glands of its blood-feeding insect vector (the tsetse). BSF trypanosomes have been considered for decades to propagate exclusively in the fluids of its mammalian hosts and mainly in the blood. In a break with this dogma, the Co-PI of this project showed that most parasites actually reside in the extravascular compartment of the skin in the vicinity of hypodermal adipocytes (Capewell and Travaillé et al., eLife, 2016). In resonance with this major discovery, the PI of this project recently broke another strong dogma considering that T. brucei relies exclusively on the glucose provided by its mammalian hosts to feed its central carbon metabolism. Indeed, we established long-term conditions for growth of the parasite in glucose-free medium containing glycerol (Pineda et al., PLoS Pathog, 2018). Since adipocytes excrete large amounts of glycerol from lipolysis and glycolysis, we hypothesised that interactions between adipocytes and extravascular trypanosomes may confer a selective advantage to the parasites in the mammalian host.

In the glucose-free environment that is the midgut of the tsetse fly vector, PCF trypanosomes primarily use proline to feed their central carbon and energy metabolism. In these conditions, the parasite needs to produce glucose 6-phosphate through gluconeogenesis from metabolism of non-glycolytic carbon source(s). The PI and the Co-PI recently characterised the gluconeogenic pathway and showed that glycerol is an excellent gluconeogenic carbon source for PCF (Wargnies et al., PLoS Pathog, 2018). More interestingly, the PI showed that trypanosomes perform gluconeogenesis from glycerol even in the presence of glucose, making them the only known microorganism using gluconeogenesis in the presence of glucose. The new mechanism controlling this modulation of carbon source preference was elucidated and named "metabolic contest" (Allmann et al., BioRxiv, in revision in PLoS Biol). We hypothesised that this unique glycerol-to-glucose preference developed by PCF trypanosomes may have a crucial role for the growth and/or development of the parasite in its insect vector.

The objectives of this project are to understand the role(s) of glycerol metabolism during the entire development of Trypanosoma brucei (1) in the different organs of the insect vector (PCF and epimastigote trypanosomes), as well as (2) in the vascular and extravascular compartments of the mammalian host (BSF trypanosomes).

To address these questions, the PhD student will use a combination of in vivo (mice and tsetse flies) and in vitro approaches using wild-type and mutant (KO generated by CRISPR-Cas9 and/or RNAi) cell lines of the BSF and PCF trypanosomes. The in vitro approaches that will be used include the co-culture of BSF trypanosomes and adipocyctes, RBP6-driven differentiation of PCF into epimastigotes and metacyclics, production of trypanosome mutants, metabolomics, proteomics, etc.).

2020-06-04 / During the CoVid-19 lockdown the team kept contact but respecting the social distancing!! 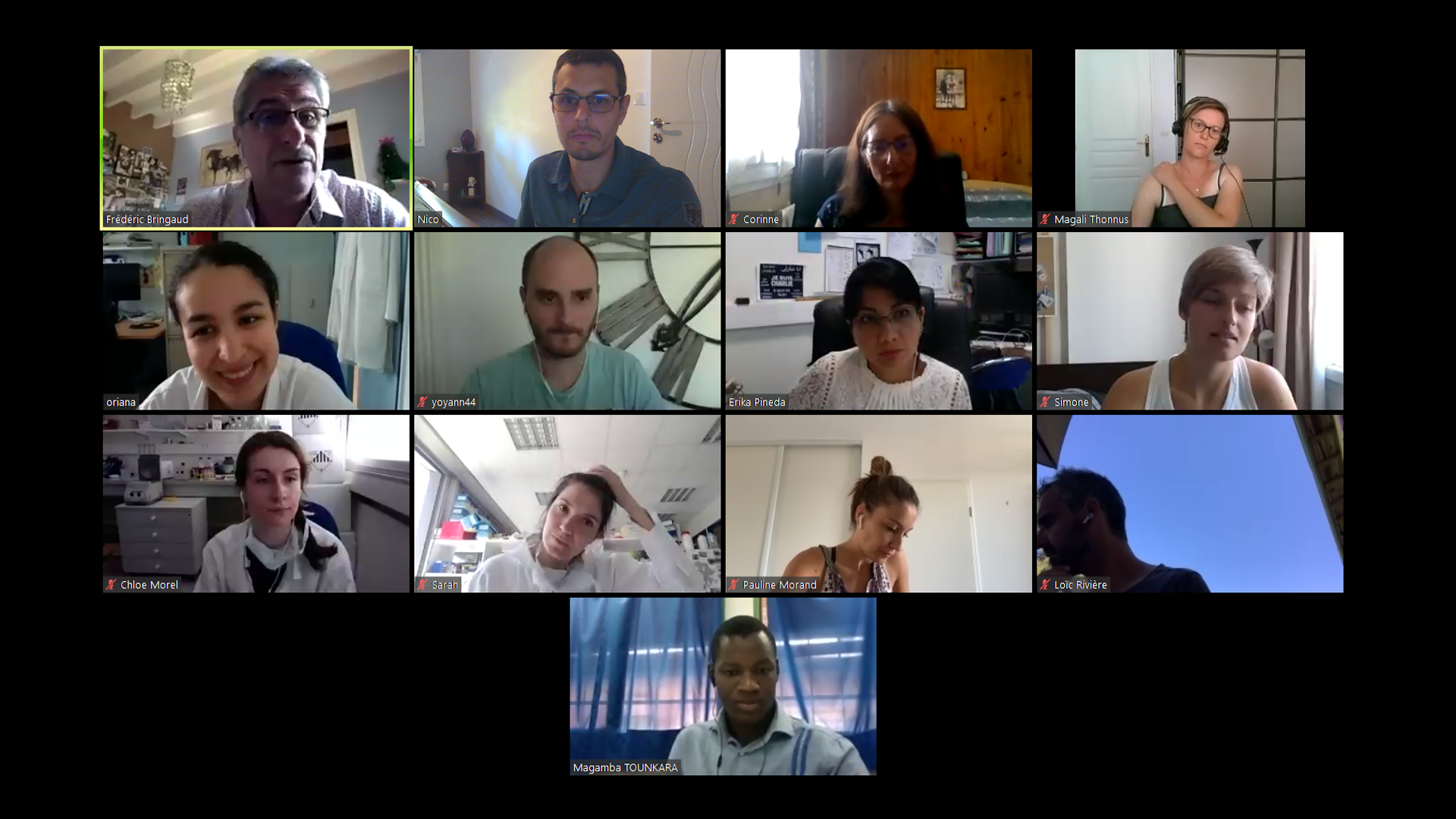 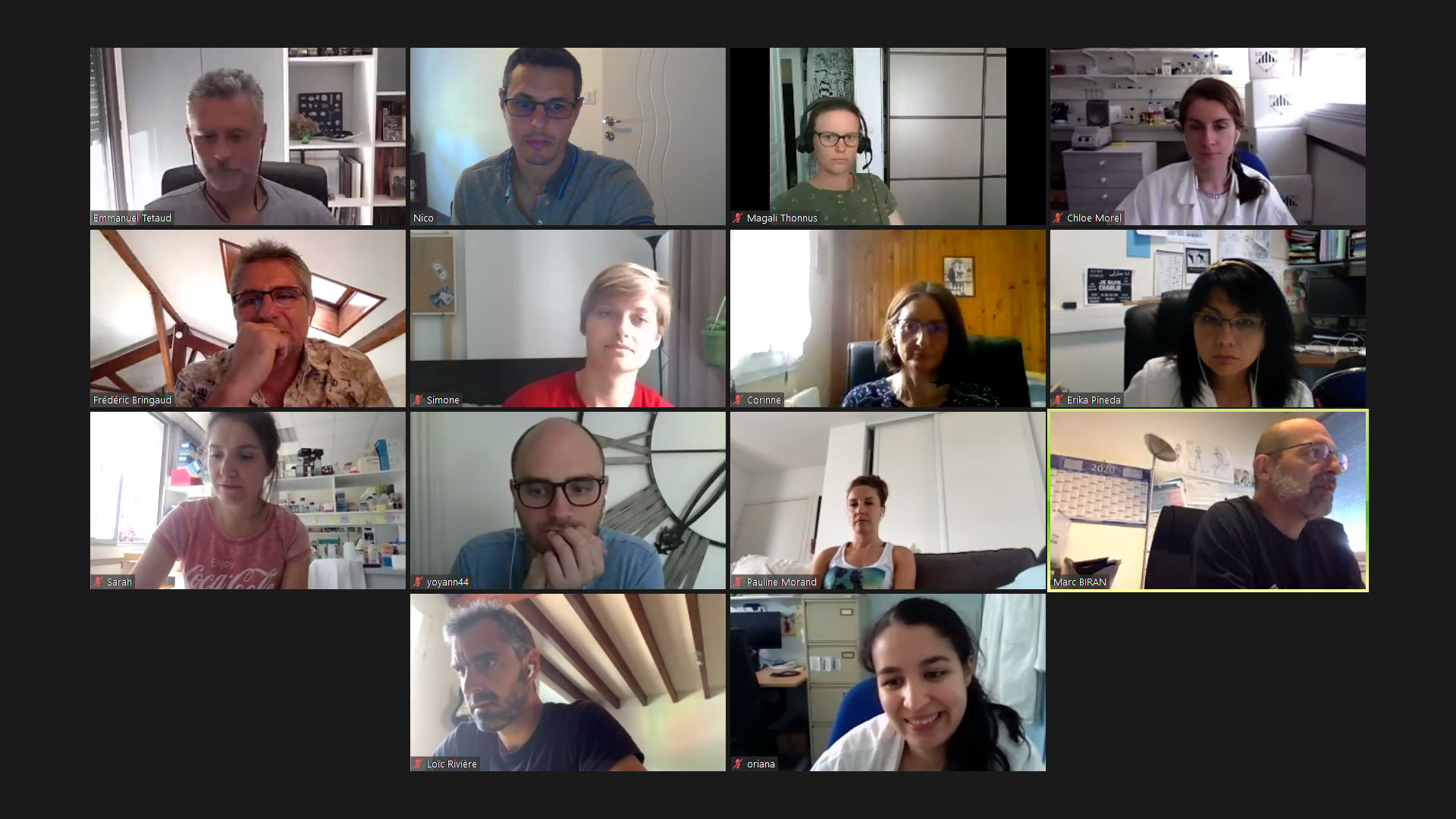