Secondary and tertiary structures of genomes 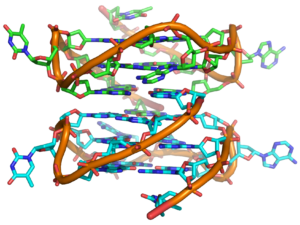 In addition to the “protein level”, specific nucleic acid structures of the viral genome can regulate viral replication. G-quadruplex nucleic acids (or “G4s”) are unusual DNA or RNA structures consisting in the stacking of planar arrangements of 4 guanines (G-tetrads). In a previous work, we identified G-rich aptamers as potent inhibitors of HIV-1 IN and RNase H (Métifiot et al, 2007) using a SELEX approach. The G4-forming aptamer 93del has been particularly studied and its mechanism of action investigated (Faure-Perrault et al, 2011). Our work suggests that enzymes from the polynucleotidyl transferase family may have affinity for G quartet structures (Phan et al, 2005).

An increasing number of investigations demonstrates the involvement of these nucleic acid “knots” in key biological processes, including viral replication (Métifiot et al., 2014; Jaubert et al, 2018). Bioinformatics performed on alignment of more than 2000 HIV genome sequences (G4Hunter) showed that G-rich conserved sequences in the HIV-1 genome are capable of forming G-quadruplexes in both RNA and DNA forms [collaboration with the ARNA laboratory (Amrane et al, 2014)]. We focused on conserved G-rich regions that regulate HIV-1 promoter activity and overlap the SP1 and NFkB binding sites and investigated whether these viral G4 forming sequences actually form G4 DNA and/or RNA structures during the process of HIV-1 infection. In addition, we developed G4 ligands (collaboration with G Pratviel Toulouse) and used them as tools to understand how these structures regulate viral replication. G4 ligands inhibit HIV replication in human cells and quantification of viral nucleic acids by specific RT-qPCR and qPCR determined that they inhibit at an early step (post entry but before full reverse transcription). This suggests that G4 structures may regulate HIV-1 replication by recruiting viral enzymes and/or cellular partners at the RNA level (Amrane et al, in preparation).

Cellular regulation of integration Cellular partners of HIV IN and post-translational modifications Drug development Development of inhibitors and novel antiviral strategies Emerging viruses Fundamental research on ZikV and SARS-CoV-2
We use cookies on our website to give you the most relevant experience by remembering your preferences and repeat visits. By clicking “Accept”, you consent to the use of ALL the cookies.
Cookie settingsACCEPT
Privacy & Cookies Policy