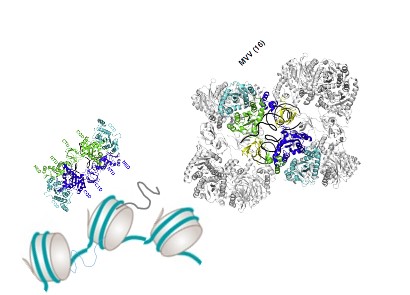 Project’s objectives and research hypothesis. The insertion of the retroviral genome into the host chromosomes, catalysed by the intasome (viral integrase (IN)/DNA integration complex), is a key step in their replication cycle. The complex formed between the incoming retroviral intasome and the host nucleosome is the first non-return contact point between the viral and cellular genomes and, thus, a platform for molecular exchange between the virus and its host. Recent works have shown that, after targeting by cellular tethering factors, the final interaction between retroviral intasome and the chromatin at the integration site involves the recognition of specific chromatin structures depending on the virus and mediated by the carboxyterminal domains (CTD) of the Ins. Our current working-model, reported in Figure 1, is based on three sets of data:  i) The retoviral IN CTDs interact both with the target DNA and histones. Thus, the functional intasome/nucleosome association depends both on the histone tails and DNA accessibility which depend on chromatin dynamic and cellular factors. The IN would scan the chromatin and DNA structure thanks to its CTD to find the suitable optimal insertion site. ii) The intasome-CTD/histone/DNA interfaces define the sensitivity of the retroviral integration complexes to chromatin structures and participate to the insertion site selection. These interfaces constitute molecular exchange sites that will further determine the integration and post-integration events efficiency. iii) Accurate mapping of the intasome/nucleosome interfaces and determination of their regulation by the host will lead to identify the molecular determinants allowing optimal integration process. Affecting these interfaces should allow modifying both the integration efficiency and insertion site selection and, thus, post-integration steps as DNA repair of the site, silencing or transcription of the integrated genes. During the last years, our team overcame the technical barriers for achieving the assembly of several retroviral intasomes. In addition to our expertise in chromatin and host/pathogens interactions, this allows us to investigate all the intasome/nucleosome contacts.

Our project aims to determine these interfaces and understand the molecular mechanisms involved in this exchange platform. It will be the first major functional characterization of the intasome/nucleosome complex, central intermediate in the viral replication. Our work will especially determine how this association governs the insertion site selection, the integration and viral replication efficiency and will allow further development of therapeutic approaches.

To this purpose, we will :

determine how these interfaces can be regulated by identified host factors (IN cofactors, remodelling complexes…); 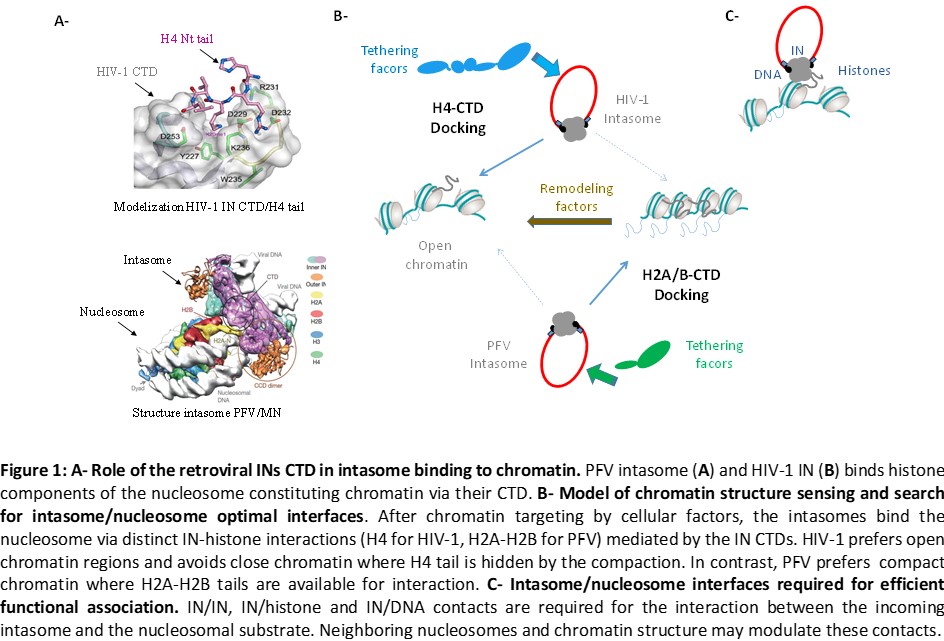 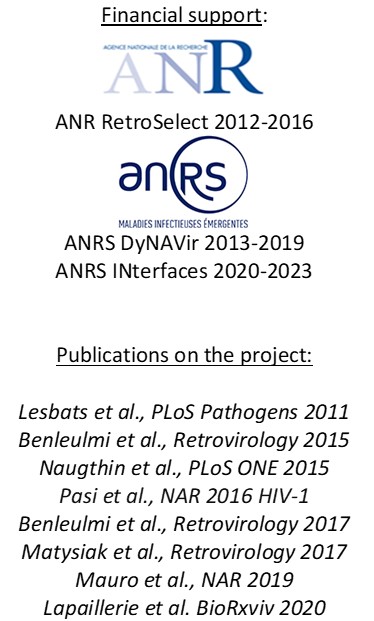