Antibiotic resistance is a major public health problem, mainly in Gram-negative rods such as Enterobacteriaceae and Pseudomonas aeruginosa, as it has been reported by the WHO for several years.

The aim of our works was to explore the emergence of antibiotic resistance either through mobile genetic elements (MGE), or chromosomal mutations. Indeed, most acquired resistance genes are thought to have been transferred thanks to integrases or transposases from the chromosome of environmental microorganisms to MGE [plasmids, transposons, insertion sequences (IS), integrons…] which subsequently spread through human and/or animal pathogenic bacteria. Moreover, some bacteria especially Gram negative rods are the capacity to mutate rapidly to develop resistance to antibiotics.

We first focused on the analysis of additional types of gene transfer that will provide a broader view on the genome mobility processes. In this context, we have initiated the study of the transposition mediated by the transposase belonging to the IS91 family. By sequence homologies, it related to members of the HUH (in which U is a hydrophobic residue) endonuclease superfamily and proteins using the rolling-circle replication. An in vivo transposition test with IS1294b, a representative of the IS91 family, has been developed and pointed the importance of ends of this element in transposition mechanism. By a one-end transposition, we showed that the IS1294b was responsible for resistance genes mobilization between conjugative plasmids belonging to different incompatibility groups in Enterobacteriaceae (Yassine H et al Antimicrob Agents Chemother 2015).

We have also completed the understanding of the role of integrons in the resistance spread, in particular with the characterization, in a Pseudomonas aeruginosa strain, of an integron harboring genes (qnrVC1) from environmental bacteria (Vibrionaceae) and conferring decreased fluoroquinolones susceptibility to Escherichia coli (Belotti et al J Antimicrob Chemother, 2015) Figure 1.

Similarly, we have explored the role of Pseudomonas putida in the spread of carbapenem resistance in isolates collected from patients hospitalized in an onco-hematology unit. This work showed that carbapenem resistance was linked to the presence of metallo-enzymes of the VIM type, exclusively VIM-2, and a new IMP variant. The resistance genes were located within various class 1 integrons on plasmids transferable to P. aeruginosa and E. coli, highlighting the potentially crucial role of P. putida as a nosocomial reservoir of carbapenem resistance genes and in their diffusion. The epidemiological study revealed the existence of hospital clones confirming the risk of spreading of these bacteria within a department.

Finally, the description of a carbapenem-resistance gene blaGES-6 on a new type of MGE (ICE: integrative conjugative element) in a strain of Pseudomonas aeruginosa (Poirel L et al, Antimicrob Agents Chemother, 2018) led us to take an interest in this new mobility structure. Indeed, ICE appear to be particularly important in relation to resistance in P. aeruginosa, often carrying cassette-borne genes in class 1 Integron, especially carbapenemase genes.

The spread of multidrug resistant (MDR) bacteria, especially carbapenem-resistant Gram-negative rods, leads to reconsider the use of old molecules such as colistin that belongs to the polymyxin family, or the evaluation of new drugs such as new combinations i.e. ceftolozane/tazobactam (C/T) and ceftazidime/avibactam (C/A). Unfortunately, resistance to these antibiotics has rapidly emerged, either through gene acquisition or mutations. For the colistin resistance we characterized a new chromosomal mechanisms involving mutations in crrAB genes encoding a two-component regulator involved in modifications in outer membrane lipopolysaccharides (Jayol A et al Antimicrob Agents Chemother, 2017). We have also demonstrated for the first time that MgrB, the negative regulator of two-component system PhoP/Q, plays a key role in acquired resistance to colistin in Enterobacter spp. (Mhaya et al., Antimicrob Agents Chemother, 2020).

For resistance to C/T, we firstly showed that the acquisition of the blaGES-6 gene would confer a high level of resistance to this antibiotic combination in an isolate of P. aeruginosa (Poirel L et al., Antimicrob Agents Chemother, 2018). Besides, we explored the emergence of C/T resistance in patients treated by these drugs for P. aeruginosa infections in our hospital, over a 13 months period. For around 16% of the treated patients, resistant isolates were observed and the study of the resistance mechanisms involved, has constantly revealed a mutation in the cephalosporinase AmpC active site, with a wide variety of mutations Figure 2. 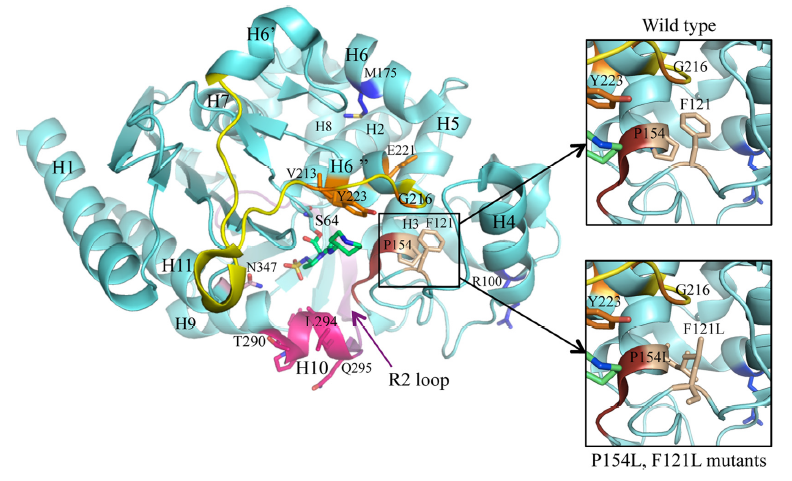 Cloning experiments confirmed the main role of these modifications in resistance but also suggested in most instances that other mechanisms may be implicated (Boijout et al in progress). That why we set up in collaboration with the universities of Canada (Laval) Finland (Aalto) and China (Beijing), the project MAGITICS which received funding from the ANR (JPIAMR 2020-2023). With this project we will develop machine learning implementation that can orient the selection of treatments by assessing the level of resistance, provide rational for the generation of novel antibiotics, assist in the surveillance of human and livestock AMR around the globe, and help the characterization of emerging resistance mechanisms.

From basic to clinical research

Surveillance of antibiotic resistance evolution is critical for delineating first-line prescription, and monitoring multi-drug resistant bacteria dissemination. We have conducted epidemiological studies in different regions in France and in several countries, in order to follow the evolution of resistance in Gram-negative bacilli. These studies confirmed the predominance of CTX-M among ESBLs (extended spectrum β-lactamases), the emergence of carbapenemases and plasmid-mediated quinolone resistance, and the absence of a wide diffusion of a unique clonal strain despite the presence of local clones (Ferjani S et al Diagn Microbiol Infect Dis 2014; Robin F et al Antimicrob Agents Chemother 2016; Maamar E et al Front Microbiol 2016; Prevel R et al Antimicrob Resist Infect Control 2019; Mhaya A. et al J Glob Antimicrob Resist 2020; Mhaya A et al in progress). In addition, the study of colistin susceptibility testing allowed us to highlight and define colistin resistance in Hafnia alvei, an enterobacteria of clinical interest, as a natural resistance (Jayol A et al J Antimicrob Chemother 2017) which is essential for the implementation of treatments and the bacteria characterization.

The emergence of resistance to the polymyxin family as well as the increasing use of colistin in human medicine, highlight the need for reliable methods for polymyxin susceptibility testing. In that context, we have evaluated the SuperPolymyxin medium for the resistant isolates screening (Jayol A et al Diagn Microbiol Infect Dis 2018), several broth microdilution systems for the determination of colistin susceptibility (Jayol A et al Clin Microbiol Infect 2017; Jayol A et al J Antimicrob Chemother 2018), and a rapid test for the resistant isolates detection (Jayol A et al J Clin Microbiol 2016). This allowed us to use these tools to assess the prevalence of carriage of colistin-resistant isolates among patients hospitalized in our hospital (Saly M et al J Med Microbiol 2017). It also led us to propose and obtain an inter-regional PHRC (Protocole de Recherche Clinique Hospitalière) (RESCO 2020-2021) aimed at evaluating the tests in real clinical situations, determining the prevalence on a larger scale and characterizing the mechanisms of resistance. An alternative to the treatment with colistin is the use of new combinations of antibiotics and we have shown in vitro the efficacy of the combination of aztreonam with ceftazidime/avibactam on carbapenemase-producing isolates (Jayol A et al J Antimicrob Chemother 2018) Figure 3. 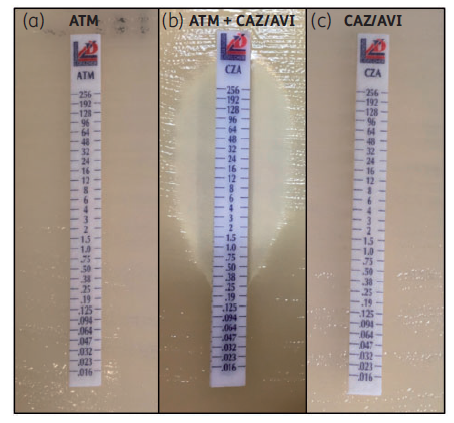 Finally, due to crucial need to develop new therapeutic alternatives, we have demonstrated with the collaboration of chemists, the strong antimicrobial potential of Lipid antisense oligonucleotides (LASOs) strategy targeting specifically a ß-lactamase expression on both clinical and laboratory E. coli strains. Our results were proved to be efficient strategies in both delivering LASOs in the prokaryotic cells and decreasing the resistance of bacteria to a third-cephalosporin generation, the ceftriaxone (Kauss T. et al. Sci. Rep. 2020). This works funded by INSERM Transfert was enhanced by a patent).